Well, we are once again into that great biblical tradition of repetition.  But first we get a couple of really good things in today’s reading:  an itinerary for where the Israelites went between Egypt and standing on what is not the Jordan side of the Jordan river (here called “Transjordan” which was still part of the official name of the country until not-that-long-ago…nothing like western ethnoo-centrism!).  Archaeologically and historically most scholars think that the vast majority of the 40 years was spent encamped, probably at Kadesh-Barnea (in the north of the Sinai/slightly south of modern Israel).  But they still did quite a bit of walking around!

Once we get into Deuteronomy, we start to read things that sound strangely familiar—though at least they aren’t (so far anyway) ritual laws about what to slaughter and how and when!  This time it’s Moses’ farewell speech.  I have to wonder how he remembered all of this to deliver this speech, you know!  Apparently the many days on the mountain listening to God giving all the laws and instruction paid off, because Moses puts it “in his own words” (by saying “the LORD said this….so do it!”) and makes a pretty readable textbook for Israelite covenant life.  He reiterates the history of Israelite life from Egypt until now, the basic laws, and even some geography issues.  It’s pretty impressive, really.

Today’s reading also includes the pivotal verse of the Old Testament (and maybe even the whole of Scripture):  the Shema.  In Deuteronomy 6.4 we read, “Hear, O Israel:  The LORD is our God, the LORD alone.  You shall love the LORD your God with all your heart, and with all your soul, and with all your might.”  the word Shema, often translated “hear,” also means listen and obey.  The people are to listen well, hear what is said, and obey.  Obedience isn’t a popular word for us anymore, but it’s at the center of the covenant community’s life.  The people are to bind the words on their hands, foreheads, and doorways—in other words, to keep them front-and-center at all times:  Lord the Lord with everything you have, every part of your being and every part of your life.  Moses will go on to explain how exactly that is to be done…and that’s for tomorrow!  For today, I wonder how we go about binding God’s word to every part of our lives, keeping it front and center?

You know, I’m really glad we have such great stories today because I was wondering what else I could say about ritual laws and censuses (which conveniently showed up at the end of today’s reading, significantly slowing me down even though I was reading while getting a pedicure…).  Thankfully today’s reading is a little of everything—a little poetry, a little talking donkey, a little confusion, a little blessing-instead-of-cursing, a little battle, a little booty-taken-from-battle, a little women-are-property, a little idol worship, some numbers and rules and instructions for festivals and holy days and their offerings—it’s a good mix!

So, naturally everyone is probably most curious about the talking donkey business.  Balaam, who is not an Israelite and yet serves/calls on YHWH the Israelite God.  You may have noticed that Balaam was commanded by God to go to Balak and say whatever God told him to say.  But then when he goes, God is angry about it and we get into a story about a seer (Balaam) who can’t see, but a donkey that can both see and speak.  The story of the donkey (chapter 22 verses 22-35) is most likely a separate story that has been inserted here and bears all the characteristics of a folk tale (talking animal, three-part structure)—and its insertion is confusing, but fun!

Once Balaam arrives we have the four oracles.  It’s likely that oracles 3 and 4 are much older than the surrounding text—some scholars suggest they date from as early as the 1200s BC.  The first two, and the narrative/prose that surrounds the entire episode, was put together to explain what’s going on and how it’s possible that the Moabites (who are probably much stronger than the Israelites) are unable to win this battle.  God’s blessing is on the Israelites, and what they do will not fail.  You might also notice that there is a tone of optimism and hope in the first three, but the fourth follows the predictions of Leviticus, suggesting that at some point the Israelites will be sent out into exile.  Regardless of the date of the poetry, though, we have here a surprisingly good and positive portrait of a non-Israelite who serves the LORD and who does only what God asks of him, says only what God gives him to say—remarkably like a prophet, actually.  And his donkey too.

This passage also contains two sections about women that are, underneath the surface, really excellent.  Zelophehad’s daughters successfully petition a patriarchal culture to allow them to inherit property (and this rule continues throughout the generations:  when there is no son, the daughters may inherit).  This is a big deal for women—without this provision, without the bravery of these five girls, daughters with no brothers would literally be stranded with no resources if their fathers died.  The second section is more troubling on the surface:  women who make vows can be overridden by their fathers or husbands, clearly implying (stating, even?) that they are property, not whole individual persons.  Which is pretty awful and pretty contextual (as in, hard to relate to our own lives!).  But under the surface we find that vows are a really important and serious thing—they presuppose that God is an active covenant partner and that a vow, once spoken, is binding on both the speaker and God.  And women can make vows, can take God seriously in that way, and if a male relative later decides it’s no good, he bears the penalty of breaking a vow (something which ritually pollutes the family and the community, as well as potentially having financial and legal ramifications).  We see this law in action in the early chapters of 1 Samuel, where Hannah makes a vow and her husband explicitly allows her to keep it.

What an interesting day of reading!  What did you notice?  What caused you questions or problems?  What piqued your interest? 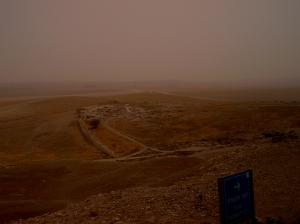 At last we get back into stories!  Numbers contains some of the coolest stories in the Bible, I think.  The cloud of God’s glory leaves the tabernacle when it’s time to move on, stays when it’s time to stay put.  The people celebrate their first Passover after leaving Egypt (this one doesn’t seem to have lots of death like the first one did).  Miriam gets leprosy for 7 days because she logs a jealous complaint against her little brother Moses.  The Israelites send spies into the promised land and discover all kinds of fruit—grapes, pomegranates (yum!), and figs—but still are too scared to move in.  Moses strikes a rock (like he did before, remember? back in Exodus?) to get water for the people, but this time God sees it as unfaithful (it wasn’t done at God’s direction or command) and Moses is told he won’t enter the promised land, even after all the work he’s done.  And, of course, the people complain, complain, complain, and even rebel a couple of times (leading to death and destruction—the earth opens up and swallows families whole, a serpent comes and bites people, which can only be cured by looking at a bronze serpent statue, fire consumes would-be priests…).  This is pretty exciting stuff!

I’m intrigued by the formula that the writer uses each time he talks about the complaining.  “The people complained against Moses” (and sometimes it even says they spoke against God!) saying “would that we had died in the land of Egypt!  Why did you bring us out here?  It would be better to go back.”  Over and over the people complain about not having meat, not having water, not having a big enough army, etc.  And over and over it’s recorded as a complaint against God.  God is their leader, their provider, their everything.  Complaining against Moses, God’s representative, is the same thing as saying to God, “you messed up bringing us out here—take us back to slavery!”  Each time, God gets angry and fed up, and each time Moses intercedes (even though he was probably fed up too!) and makes it true that “the Lord is slow to anger, and abounding in steadfast love, forgiving iniquity and transgression.”  Each time God relents and lets the people go on (well….most of the people).  It’s interesting to ponder what this means about the covenant God has made with the people.  From the people’s end, it’s already not going so well—there’s a pretty serious lack of trust (which is interesting since they’ve seen what God can do!).  So God decides that these  people who have seen but still do not believe will not get to live in the promised land—that will be for the next generation, ones who grow up relying on God rather than on themselves, ones who know nothing but God’s providing for them.  It’s an interesting strategy.  But God keeps God’s promises—God doesn’t let the people go from the covenant, God just keeps asking that they try to be good covenant partners, over and over.

photo is of the Canaanite city of Arad, hometown of the king mentioned in Numbers 21.  Photo by TCP

Okay, so I think today’s reading was the most repetitive so far.  This is always what I remember about numbers:  “then the tribe of X brought these 12 things…and the tribe of Y brought the same exact 12 things…” on an on through 12 tribes all bringing the exact same things.

Interestingly, Numbers isn’t really about numbers.  It’s called that in the Greek version (called the Septuagint) because the book begins with a census (which, granted, takes up 5 whole chapters!).  But really the book is about the 40 years the Israelites wander in the wilderness.  The Hebrew name of the book is “In the Desert” (from the first verse) because it takes place entirely in the Sinai.

But today we didn’t get much of the stories—we got the lists of how many men there are, who gets to carry the tabernacle and its holy instruments, and what configuration the camp should be in (with the tabernacle/tent of meeting at the center, then the priests camped around it, then the rest of the people encamped around that, according to their tribe…with unclean people on the outside).  I wonder if this might be an interesting thing for us to think about:  what is at the literal center of our lives?  God filled and covered the tabernacle with glory—and the way the Israelites believed things worked, God’s very holiness lived in that tent and even looking inside could get you killed.  In a very literal way, God was at the center of the Israelite’s lives.  What is at the center of our common life?  Of our individual lives?  Is there a way we can symbolically live that out (besides everyone camping around the church building, which I’m not so sure will be the best option!)?  I also wonder:  who are the unclean people who are forced to live outside our camp, as far away from God as possible?  And since we are Christians (not ancient Israelites wandering in the desert), how can we break down the invisible yet real barriers and invite those people back into community, into God’s presence?

photo is of the Sinai desert, taken by TCP (from a bus window).

Tuesday: With The Word--Online Bible Study

Friday: Random Questions (we ask, you answer...or you ask and we'll answer the next week!)

Promote Your Page Too